I’m not on two wheels but it feels good to travel again.  As I write this I’m sitting in a B&B as the sun cuts through early morning clouds on the eastern edge of the Canadian Rockies. 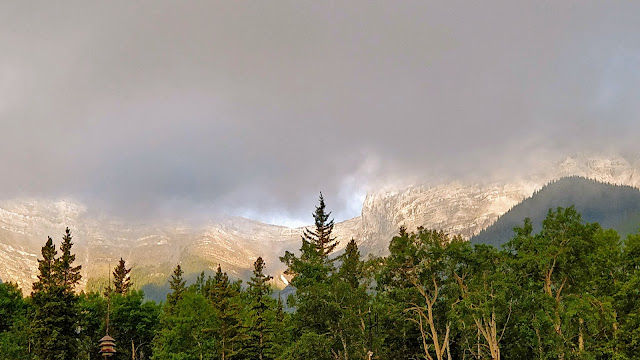 We spent a couple of mad days in Edmonton, but cities aren’t my thing and giant malls even less so.  Now that we’re 3+ hours west of Edmonton in the mountains, the adventure begins.  Today we’re heading a couple of hours south to the Athabasca Ice Fields for an eco-tour of the glacier.  We’re in Brule for the week and so far the landscape has not disappointed.

Brule makes for a nice, quiet base for exploring the northern Jasper area.  It would be a 3700km odyssey across the Canadian Shield and then the Praries to get here by bike.  We drove across Canada in 2018 and did it in Elora to Sault Ste Marie to Thunder Bay to Winnipeg and then kept going on the south route.  To get up here it’d need a Saskatoon and Edmonton stop before pushing on to Brule.  That’d be 3 days of  700-800kms per day and then a couple of shorter days into the mountains.

It has been single digit temperatures here in July in the mornings and sometimes when it’s raining.  A warm day will get up into the low 20s, which is nice riding weather, but you’d want to dress for the cool.  It has also been quite wet, so good rain gear is a must.

Coming back, Yellowstone is about 1400kms south of us, so a couple of days ride down there, a couple of more days riding around the park, then a scenic 2300km ride back to The Sault, then a final leg home.  That’d be about 7000kms of getting there and back with shorter scenic rides on location, so perhaps 10k kms.  Spread out over a month, this’d be one heck of a way to see a lot of North America’s middle.

I’m at the end of our week out here and this place is fantastic.  Were I living out here I’d have my choice of epic rides on my doorstep.  The big roads are sweeping, high speed routes with unbelievable views.  It’s Canada so the tarmac isn’t smooth and you’re dealing with tar snakes and buckled ashphalt, but it’s never SWOnt tedious.

Brule to Jasper to the Athabasca Glacier: we drove this (in a car) on Wednesday and it’s a spectacular drive.  You’re climbing from 979m (3200ft) to 2121m (6958ft) with another 618m is descents – the trip is seldom on the level and usually in a bend, especially on the AB-93 Icefields Parkway – one of the most scenic drives in Canada.

You pass Mount Robson (the highest peak in the Canadian Rockies) on the way into BC.  It’s worth a stop.

The drive this way is fast-mountain-highway with lots of trucks.  On the way out we had a bear stop on the side of the road to let us by before crossing.  It’s that kind of ride. 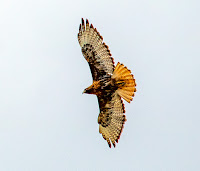 Over the continental divide the forests get lusher and have a more Pacific rain forest vibe, though you’re still at altitude so it’s mainly coniferous.  We went down as far as Valemount to check out the Three Ranges Brewing Co..   The place has a nice vibe with pictures of all the local high school grads on each light post.

Driving us back to Jasper, we observed some near disastrous truck passing.  The people moving heavy goods through the mountains seldom slow down and the result is often passes on the shoulder and other high risk moves.  Once I had a handle on how the big trucks rolled, when you see one brake take it seriously, they don’t slow down for much.
If you like the fast sweeping roads and views that never quit, along with the sudden animal spotting, you’ll love the highways in and around Jasper.  Just one last note:  speeds limits seem pretty tight in Jasper National Park, so if you’ve got an Ontario 100 means 140 mindset, you’ll run into problems.  Alberta has a pretty reasonable 110km/hr limit and most people on the highway seem to stick within 10km/hr of it.  In the park it’s usually 80km/hr but often slows due to high animal areas or other environmental factors.  Park wardens can pull you over for speeding and other infractions and there are a lot of them about.  Why rush anyway?  The place is well worthy of a slower pace. The Road to Miette Hot springs:

If you’re looking for interesting technical roads to ride, you want to hit some of the spur roads up to other areas of the park.  We did Miette Hot springs one day and the Google map doesn’t do it justice.  In addition to some gnarly switchbacks, the rest of the road into the mountains is never straight and always going in a new direction.  It’s 17kms of really nice riding.

The road is Canadian (so no butter smooth tarmac here), but it’s well maintained and the views are spectacular.  Once we got up there we discovered that Parks Canada runs noon to 8pm hours in the summer so locals can make their way up there after work for a soak.  Nice, eh?  If I were living near the north gate of Jasper I’d be aiming for 34kms of engaging technical riding with a soak in the hot springs to break it up many times a week during the summer.

There’s also a nice family run restaurant just down from the springs if you’re looking to eat.

17kms from the main Jasper highway up to Miette Hot springs.

The Road to Maligne Lake: 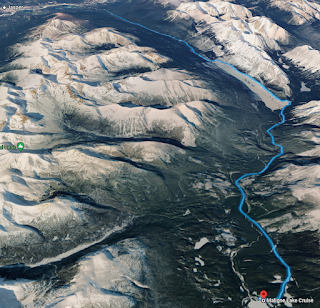 This is another wonderfully technical road with constant direction changes.  It’s much longer than the Miette Hot springs road but you end at the lost world of Maligne Lake where you’ve probably got the best chance on the planet to see a dinosaur.

The road follows the outflow from Medicine Lake, twisting and turning with the raging river and then traces the shoreline before climbing even higher towards Maligne Lake.  Stunning views frequent animal sightings and never dull roads meant this was one of the most motorcycled routes we saw.  In the photos below you’ll see rain and then sun – they were taken less than a minute apart.  You always want to be ready for rain but it seems to pass quickly up in the Rockies.

48kms from Jasper to Maligne Lake. 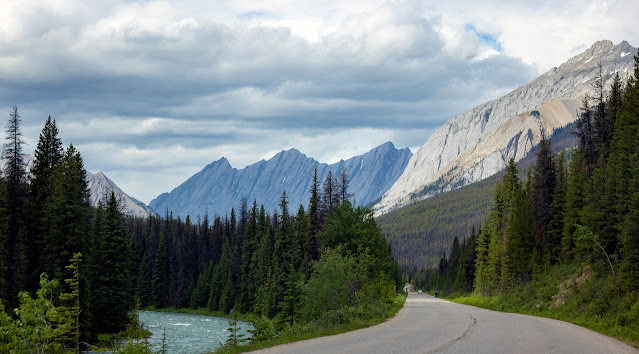 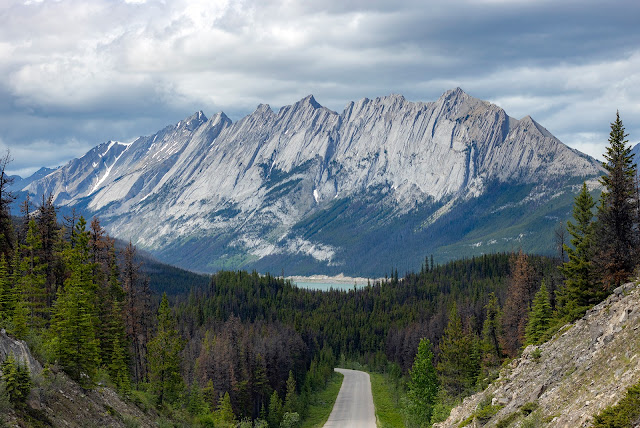 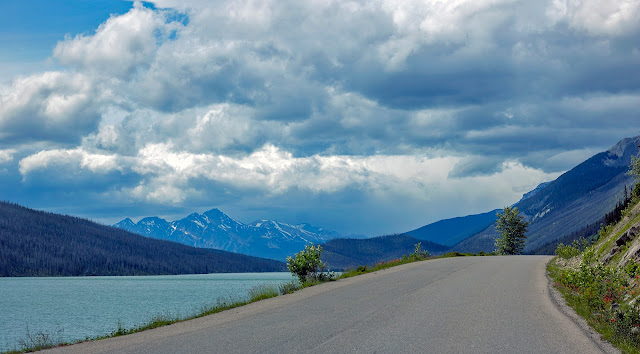 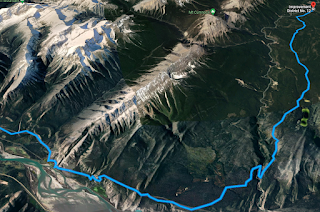 If you’re willing to get dirty there are a number of roads into the park that offer a more adventurous experience.  I haven’t done these but a light adventure bike and living in the area would have me riding to the end of as many remote roads as I could find, like this one!