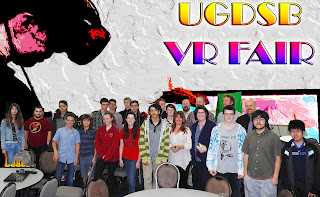 I got into virtual reality way back in 2015, to the point where my secondary computer engineering program was making VR systems for other schools in our board and we developed a board-wide Ministry funded research project on it.  Having worked with this emerging technology from the very first commercially viable system, I’ve watched with interest as the field matures and it has me thinking about how we can move beyond the prejudices in our very conservative education system and toward a mindset where the ‘e’ in elearning stands for ‘enhanced’ rather than ‘electronic’ and is considered a necessity for a superior pedagogical experience rather than an evil to fight against or an excuse to cut funding. 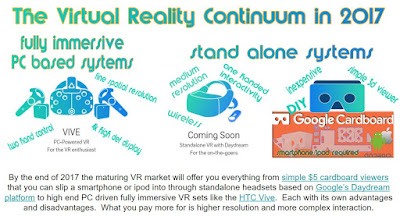 Back in 2017 the only way you could do VR was with the processing power of a desktop computer.  We built those machines to spec and then set up a variety of fully interactive, high resolution headsets on them ranging from HTC Vives to Microsoft supported setups by Samsung through our board’s SHSM program.  I’m still providing hardware support for those machines years later.

We travelled to other schools and conferences around the province demonstrating immersive VR for students, parents and other educators.  In most cases they got stuck on the games, but games are often the early adopters, like the first-returners after a forest fire, they push technology and create systems that are adopted by later industries, like education.  Many people turned their noses up at VR even as they were stunned by how immersive and engaging it could be simply because it’s ‘all about gaming’, but (of course) that isn’t the case.

At Skills Canada Nationals in Moncton in 2016 I wandered the floor while our IT & Networking finalist duked it out in competition.  I came across a VR training system to operate one of the all-in-one lumber cutting systems (the kind that grabs the tree, cuts it, trims it and stacks the finished poles for transport).  These complex mechanical systems cost millions and the only way to train on them was to train on them, before VR got involved.  The VR training system they had cost upwards of $80,000 to put together, so it was far from cheap, but what it did was allow the company to train operators prior to putting them on the real multi-million dollar equipment and it reduced user-error in new operators by over 80% when they finally got into the real machine.  The end result was millions saved in broken equipment and lost productivity. 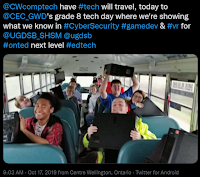 In applying immersive VR in our classroom I’ve come across instances where students with special needs could suddenly express their genius and I’ve had students produce complex VR based games that gave them the portfolio they needed to move on into high-demand post-secondary digital media programs.  It has also reframed for me how 3d modelling and emerging digital media have their own literacy requirements that many people are oblivious to.  This ongoing work culminated this year when we won Skills Ontario provincials in 3d animation and then went on to win Skills Canada nationals to become the top 3d animation school in the country.

All of these experiences and development feels like it’s leading somewhere, and that somewhere is beginning to come into focus.  A digitally enhanced classroom offers many benefits and improvements to pedagogical practice, but it requires staff and students who are fluent and proficient with the technology.  This is an ongoing problem in an education system that diminishes the potential of technology and clings to old ways, usually to the benefit of the organizations involved in public education.

Things have been, let’s say ‘rough‘ during COVID as the system fell into repeat rounds of remote learning without any kind of plan or expectations of success.  The new normal became to just do and expect less as the limited and atrophied format of elearning became evident to all, but any educator who approaches the job from that angle should probably be looking elsewhere for work.  As things come back toward some kind of normal I’m hoping we can explore virtual and digitally augmented learning without the entrenched prejudices surrounding webpaged based/screen delivered elearning because this emerging media offers some powerful opportunities.

In the time we’ve been in pandemic-limbo VR technology has moved along.  Those 2017 ‘coming soon’ stand alone systems are no longer lower resolution options and they are now pretty much where a desktop top driven wired system was in 2016, for one quarter the price.  The evolution toward fully interactive, high-resolution virtual reality will continue and education needs to get over it’s e-prejudices to better understand and leverage it. 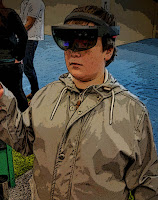 My son gave the Hololens a go back at the ECOO conference in 2016.  It was very much a prototype-proof-of-concept device, but the idea of eye glasses sized headsets is where VR is headed.  Along with a pair of haptic gloves and other IoT type sensors, we should be seeing portable, capable, fully interactive systems in the next couple of years that continue to expand the bandwidth between us and our rapidly expanding digital infrastructure.  Interacting with digital information through a two dimensional low-resolution/screen will look as archaic as dot matrix printers in a decade.

VR isn’t the only emerging digital technology that can empower our pedagogical practice.  Artificial Intelligence is also opening doors to radically individualized learning opportunities that would benefit all students and make our rows of desks in overcrowded classrooms look positively medieval:
https://temkblog.blogspot.com/2021/03/refocusing-ontario-education-on-student.html
Virtual possibilities back in 2016 (education has made little effort to engage in any of them):
https://temkblog.blogspot.com/2016/12/virtual-possibilities.html
Our MoE grant research into VR in 2017. No follow-up there either:
https://temkblog.blogspot.com/2017/07/replies-to-our-moe-experiential-student.html
Reaching out to industry at the FITC conference in 2018.  Industry doesn’t know how to engage with the prickly world of public education either:
https://temkblog.blogspot.com/2018/04/fitc-pitch.html
In 2016 I was looking to escape the staid and restrictive world of #edtech in order to try and explore emerging technologies.  Six years later we’re churning out national champions in fields ranging from cybersecurity to 3d animation:
https://temkblog.blogspot.com/2016/11/ecoo16-virtual-reality-diy-school.html
Meta’s Project Cambria, the next gen in VR:
https://www.pcgamesn.com/oculus/project-cambria-release-date-price-specshttps://www.pcgamesn.com/oculus/project-cambria-release-date-price-specs
Facebook is morphing into Meta in order to drive a more complex interface with digital information:
https://about.facebook.com/company-info/
VR in education:
https://www.classvr.com/virtual-reality-in-education/
10 best examples of VR in education (Forbes):
https://www.forbes.com/sites/bernardmarr/2021/07/23/10-best-examples-of-vr-and-ar-in-education/?sh=4c2777871f48