Saturday morning was sunny and clear and I’d had a good nights sleep in Osgoode.  I talked Fiona, who I was staying with, into coming for a ride over to the Gatineau Hills in Quebec.  I’ve never ridden in “La Belle Province” before so it would check that box, and Gatineau Park in the hills is lovely.

We found a Cora’s to do breakfast out near where I used to live in Ottawa before we pushed on through town.  I hadn’t ridden two up on the Tiger since the summer before (the Concours does that duty now), and Fi hadn’t been on a bike in a long time, so we were a bit jerky to begin with but got smoother as we went.  I also don’t spend a lot of time in cities if I can help it, especially on a bike, so I was re engaging with my urban riding skills.  Ottawa has a fascination with traffic lights and (like everywhere in Ontario this summer) construction is running rampant.  I had the G-maps up again which did a good job of navigating the maze of closures to get us over the bridge and into Quebec. The park was also full of closed roads which had us turning around many times.  Where data is easily collected (ie: in urban spaces), online mapping apps are functional, but the moment we were in less data driven areas (like Gatineau Park), it lost the plot, first suggesting we head around Meech Lake.  That ended at a heavily secured gate complete with RCMP with automatic weapons.  We guessed someone was in residence. 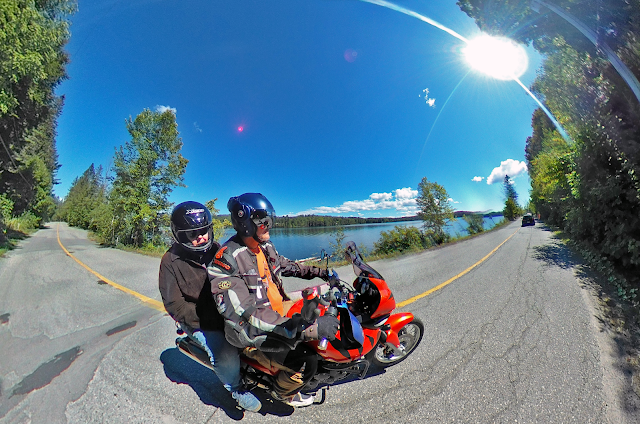 Back around Meech Lake (the road is atrocious but the views are nice), the bike was handling the crumbling pavement, but the x-cross smartphone holder I use on the handlebars was slowly giving up its grip on my phone.  We finally gave up on trying to get to a lookout (all roads to it were closed) and headed back into Hull to cross the river again.  Roads there were in really poor shape and while making a left hand turn we rolled into and out of a mega-pothole (no way to avoid it, it was lane wide) and the phone popped free and flew over my shoulder.

The old OnePlus5 was in its fifth year of service but didn’t survive the crash.  I  ran back to get it and when I rounded the corner a shifty looking fellow had picked it up to take it back to his car.  I trotted up in head to toe kevlar and told him it was mine and he handed it back.  Some shifty cloning and he might have been able to get into some sensitive data on there, so I’m glad I got it back.

Fi got us back through the construction madness and to Osgoode where I loaded up the paniers and made my way over to the hotel by the party in Kanata.  That involved lots of changes of direction because of all the road closures (including the main 417 highway through the city).  Finally finding the first open on-ramp, the Tiger and I pulled onto an empty five lane highway and legged it to Kanata, the temperature gauge falling back down to normal levels once we got the wind moving.  Even in the heat and traffic the bike worked flawlessly with the fans running when needed.
The Best Western GLO in Kanata is ultra-modern with Team Sweden coloured (royal blue and yellow) furniture and big neon lights on the outside.  Fi called my old friend Darren and we discovered we were staying in the same hotel, so I arranged a ride over to the party with them, like it was 1989.  How didn’t we know we were in the same hotel?  Because smartphones isolate us in strange ways.  They stop us from asking for directions.  They stop us from talking to each other because they provide the information we need (at a price).

All my maps were on the phone and the phone was no more, so I didn’t even know where the party was.  Being dependent on someone else for directions or information is what a smartphone frees you from, but is it really such a bad thing?  I was more annoyed by my atrophied brain struggling to remember phone numbers, something that I used to have no trouble with.  We off load all of this information into our devices and then convince ourselves that we’re incapable of doing it ourselves.  Read The Shallows if you want a deeper dive into what I’m talking about here.  Losing the phone has me rethinking how to map a road trip.

The party was another piece to the puzzle on this trip.  Getting older as a male can be an isolating experience.  Seeing the old faces and sharing memories was sorely needed.  We got back to the hotel around midnight and I was soon asleep.  The next morning I followed Darren and family over to a breakfast in Barrhaven with the old crew.  Afterwards I stopped by Canadian Tire and picked up a paper map of Ontario.  A brief look in the parking lot got me as far as Calabogie where I aimed to stop again once clear of the urban sprawl and do some old school mapping.  What would it be like to ride without the phone barking orders?  Would I be able to remember my route without stopping every five minutes?  I was about to find out…