Due to financial constraints and various responsibilities I’d almost talked myself out of going to visit an old friend (we’ve known each other since he was 13) at his 50th birthday party last weekend, but I’m so glad I didn’t.  Seeing the old faces and catching up was brilliant, but so was the chance to be out in the wind for days on my bike.  Sometimes it takes stepping away from your place in the world to gain the perspective you need to better understand it. 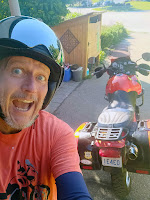 I left on a Friday morning as the sun beat down and temperatures started to rise.  I’d intended to take the Kawasaki but it picked up a flat last week and replacement tire isn’t in yet so I turned to the trusty nearly 20 year old/84k Triumph Tiger to take me away.  Following standard GTA avoidance protocols I headed east instead of south to the crowded and manic highways of Toronto, which Google Maps always prompts me towards (getting there five minutes sooner is much more important than your mental health!).  Other than a traffic light in Centre Wellington not seeing me waiting (they’re quick to road-tax me but slow to recognize motorcycles as a vehicle – I ended up putting the kickstand down and running over to the pedestrian button to change the light), it was clear sailing out of my increasingly crowded and poorly infrastructured home county.

Riding into the rising sun I made good time until I hit Newmarket, which was all poorly timed traffic lights and frantic citiots rushing to get one car ahead.  I was going to stop for a coffee but nothing presented itself in the strip-mall cookie-cutter desert of GTA expansion and rather than grate on about wearing masks all the time I preferred to just avoid the masses, so I pressed on out the other side and back into the country, except the country is now plastered with gravel trucks grumbling in and out of construction sites to build more housing for the ever expanding Greater Toronto Area.

I’d been on the road about two hours when I rounded the end of Lake Scugog on the Port Perry causeway and pressed on towards Peterborough.  At a four way intersection someone in a trophy truck (top of the line full-sized pickup with bling wheels and chrome that will never do a day of work in its life) ran the red light making a right hand turn in front of me.  I edged over in my lane ready to do something more drastic but he stopped.  The lead rider in a gaggle of Harleys coming the other way started making angry monkey gestures because he felt that I was encroaching on his lane (which he was cutting the corner on).  It’s one of those things about riding in the insanity of Southern Ontario: everyone is very keen to tell you what you should be doing rather than making better decisions themselves.

I pushed on, hoping to get beyond the gravitational suck of Toronto driving culture.  Construction on the highway into Peterborough slowed things up again as people in massive SUVs rushed up the soon to be closed left hand lane to get a few cars ahead (and cause miles of backup), but if you’re not driving a massive SUV and butting in line you’re not doing it right.

Finally on Highway 7, I continued east toward Ottawa aiming for the Iron Rooster about halfway along the day one map.  Traffic thinned out and everyone settled into a less manic rush as the (sh)city fell behind.  After a stop in Marmora for gas I didn’t really need but a stretch I did, I rolled on to the Iron Rooster for lunch.  I haven’t seen any Ontario Provincial Police presence in my community for weeks, but on Hwy 7 there were multi-car speed traps set up every 300 feet or so.  By the time I stopped for lunch I’d seen over 20 police vehicles.  By the time I got to Osgoode (south of Ottawa) the number was over 50.  It’s nice to know that the OPP is focused on bonus tax collection and making sure the insurance industry is getting its pound of flesh rather than looking after the communities it claims to police.

The Iron Rooster is a cool spot right off the highway with a big parking lot and indoor/outdoor seating that helps ease any covid anxieties (they roll up multiple doors to make the inside outside).  The entire place is motorcycle themed and specializes in rotisserie chicken in various sandwiches.  That focus makes for good food and I enjoyed “The Rossi” which was a “Rotisserie chicken tossed in pesto mayo with tomato, avocado and havarti cheese” on a toasted brioche bun, locally cut fries too, nice!

Coming out of the restaurant I ran into three native women who were out for a ride on their Indian motorcycles.  One of the nice things about riding is that it tends to remove the social barriers that prevent us from talking to each other.  We struck up a conversation about our bikes and I asked them if the name bothered them and they shrugged, saying it was a historical brand and they liked how the company represented their culture, and they loved the bikes (all three were on variations of Indian Scouts).  We then had a good talk about why we enjoyed riding so much.  Being out in the world on a bike puts you in touch with the thermoclines you’re passing through and we all dug that you can feel the air and smell the smells when out in the wind; it puts you in touch with Turtle Island.


A distance was starting to form in my mind from where I’ve been feeling stuck in the village we moved into that is rapidly being converted into an urban subdivision.  As I rode away from the Rooster with a full stomach and some perspective, the old bones of the earth started to appear in the form of the Canadian Shield, poking up between pines and lakes (if you could see past all the police parked on the side of the road).

I had the smartphone clamped on the handlebars and when it wasn’t barking instructions at me it was flashing speed trap warnings.  I used to drive Highway 7 quite often when I lived in Ottawa and the lakes, woods and stony Shield were always my favourite parts of the drive.  Fast food restaurants now litter the route and the prettiness is being chased away by an influx of people.  Those chain restaurants have done a good job of chasing small town diners out of business as well.  One of the magical things about urban expansion is that everywhere starts to look the same after a while.
Traffic was light and I made the occasional pass, but between the police blitz and volume of traffic, Highway 7 isn’t the picturesque alternative to the 401 that it once was.  I wasn’t in a rush to get to Osgoode but I found the smartphone’s manic attention getting behaviour exhausting and when I did occasionally see a place I might stop it I found myself pushing on to keep to with the schedule Google had decided for me.  I finally turned it off and found I could enjoy the scenery and the ride more without all that noise.
Six and a half hours in I stopped in Perth to hang the phone back up and guide me in to Osgoode.  I rode past a the only non-franchise local coffee shop I’d seen on the entire ride because it was neck deep in construction and the phone was barking alternatives at me all through town.  As the sun started to stretch out the shadows I made my way into Osgoode on back roads and finally to a friend’s place I could stop at for the night.
The ride east was enlightening and it started a process that has me rethinking many of the habits I’ve fallen into because of where I live.  There is a manic oneupmanship that is a central tenet of Southern Ontario driving culture, and it’s something that makes everyone who buys into it supremely unhappy and stressed.  Getting one car ahead, even if it’s wasteful and potentially dangerous is everyone’s goal.
From many miles away I was thinking back to where I live as I rode the final miles of this Friday across Ontario.  Construction noises start before 7am every day.  Sitting outside for a morning coffee has you surrounded by the stucato gun shots of nail guns in the new housing division next to us harmonizing with layers of beeping from various heavy equipment backing up again and again.  This morning that was eventually drowned out by our neighbour’s professional lawn service getting their industrial grade (helicopter-loud) lawn mower out (at 7:30 in the morning) to trim their golf-course perfect lawn.  With that never ending noise, dust and with thousands of new people moving into the area, my quiet village is no longer either of those things.  Looking back on it from that great distance across the province I wondered if I’m holding on too tight to something that simply isn’t there any more.