I had a go at mounting new tires on the 1971 Bonneville project rims today, and what a pain in that ass that has turned into.  The rear tire is a mess of strange engineering decisions, including 3 holes for the inner tube valve, two of which are filled with rubber/metal pads with valve stem sized bolts sticking out of them.  Why they would do this is beyond me.  It creates a needlessly heavy wheel just where you don’t want it (where centrifugal force amplifies it at the rim when it spins).  Perhaps it has something to do with the spokes and creating a true (round) wheel by adding weight?  The rear tire went on easily enough, but the inner tube was a pain to get the valve in place and it doesn’t seem to be taking air.  I’ll have to take that apart again and figure out what the hell is going on. 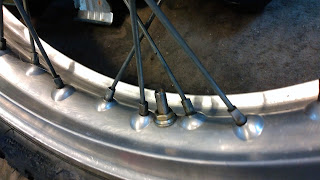 Also in bizarro British ’70s engineering world, the front wheel has the valve stem hole drilled in the worst possible location, right near two spokes, which makes putting the compressor’s tire inflation nozzle on it impossible.  There are spaces all around the rim where the hole could have been drilled to allow for easier access, but the Meriden Triumph ‘technician’ threw it in there.  If there is an engineering reason for it, it’s beyond me.  Putting the hole in the space between more distant spokes shouldn’t hurt the durability, but they didn’t do that.

I’ve done inner tubes and tires for my modern Triumph Tiger recently, and just did a tubeless tire on the Kawasaki (complete with tire sensor hack), so this shouldn’t have been the faff that it has turned into.  I ended up leaving both rims sitting in the garage.  I’ll come back to it another day when I’m less frustrated by it.