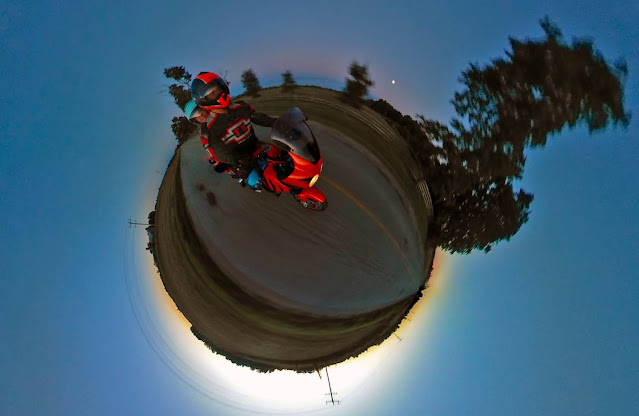 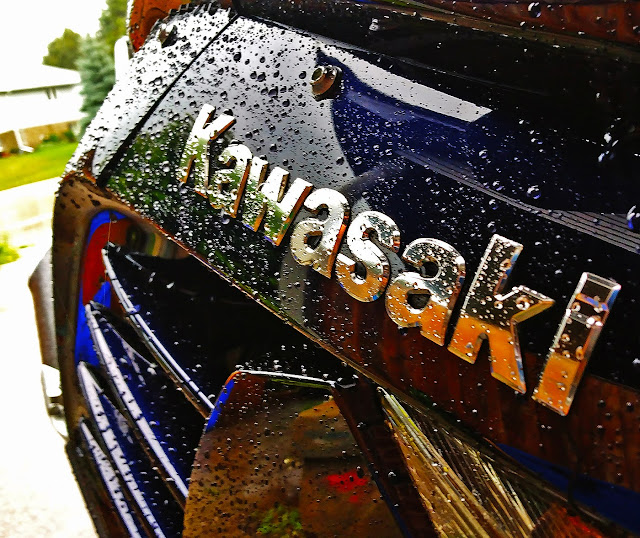 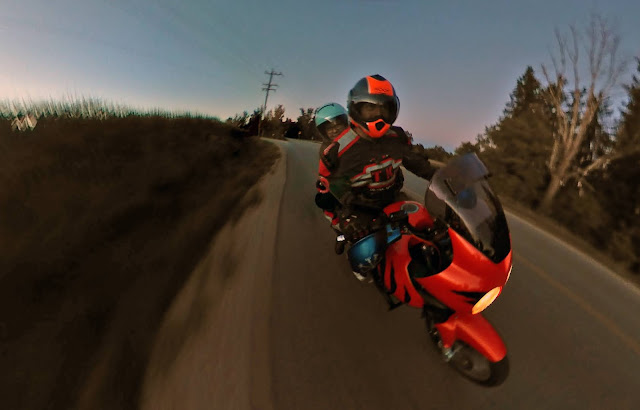 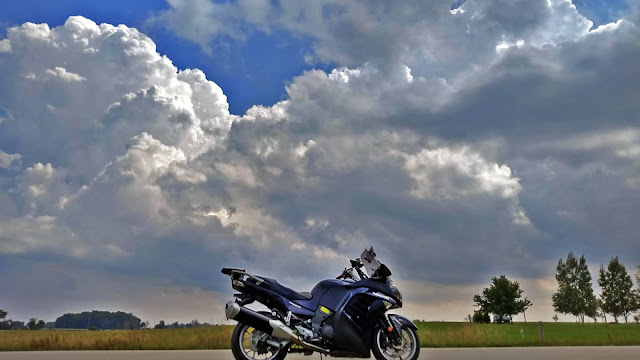 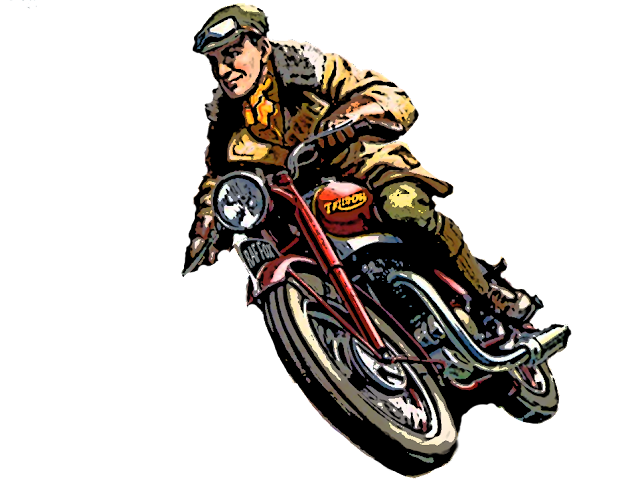 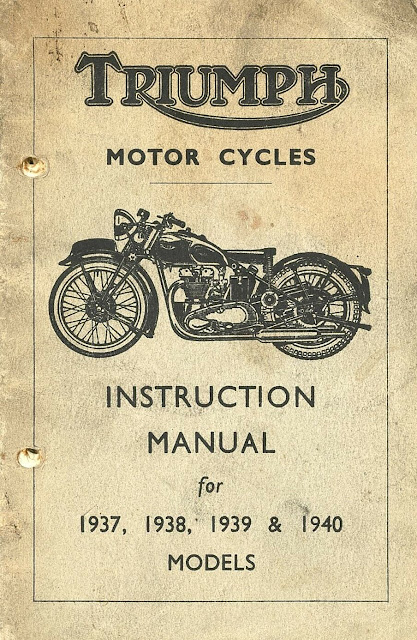 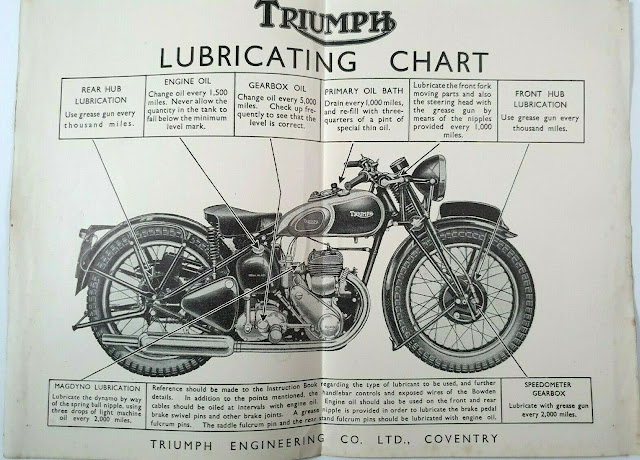 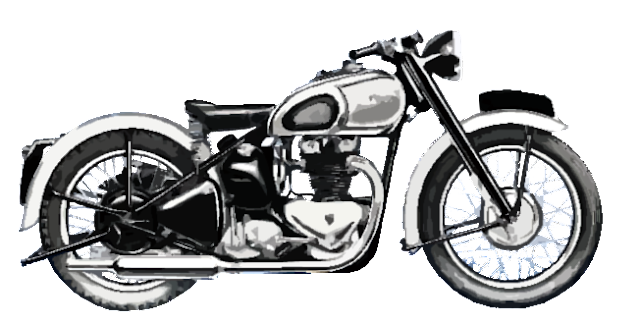 I’m always looking for period bike images.  Never know when I might be able to use them for a reference on an original drawing.  I’ve been up to those too, creating scenes from the novel:

… and some sketched (pen and ink) scenes from the novel: 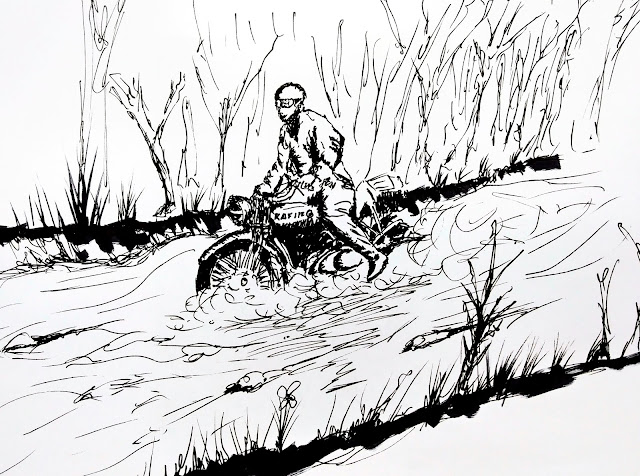 Here’s a mock-up book cover concept based on a 1940s comic book style: 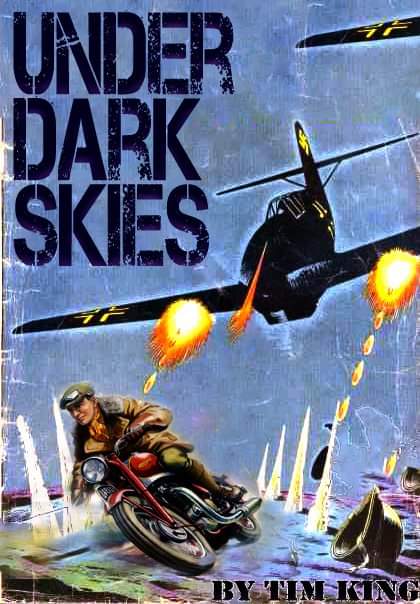 I’ve been monkeying around with the blog logo too: 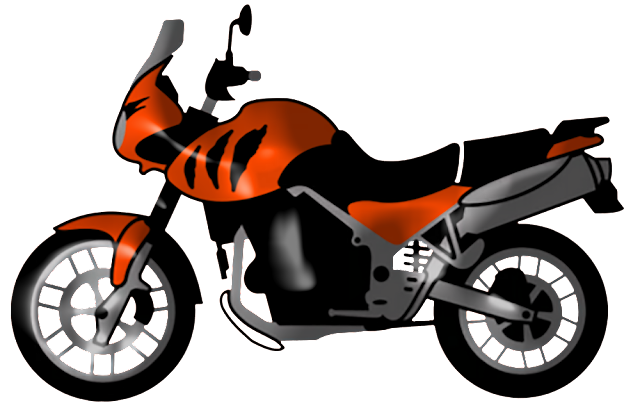 … and may eventually put a t-shirt out: 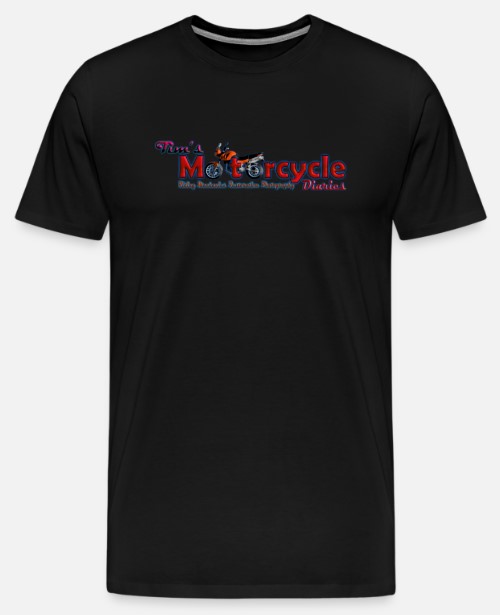 We managed an afternoon at SMART Adventures before the end of the summer: 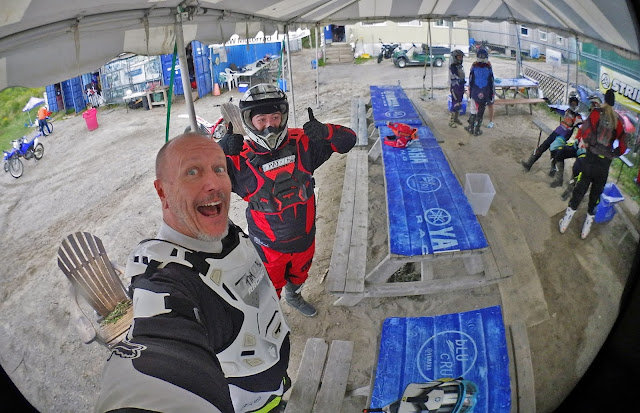 It’s never a bad time, but I went in the ‘expert’ group which consisted of a dad who wanted his son on a bike that was too big for him.  The kid came off it so often that it became tedious, so we rode back to base and he switched to a smaller bike and then fell off that a lot too.  We still got some good trail riding in and our instructor (Louise) was fantastic, but ‘expert’?  Not so much.  We spent a sizable portion of our very short 3 hours picking this kid up or riding back and forth for his various equipment change needs.  His finally move was to ride into a massive puddle and drop the bike in the middle of it, causing us to spent 20 minutes getting it out and then following him and his dad as they two-upped back to the office. 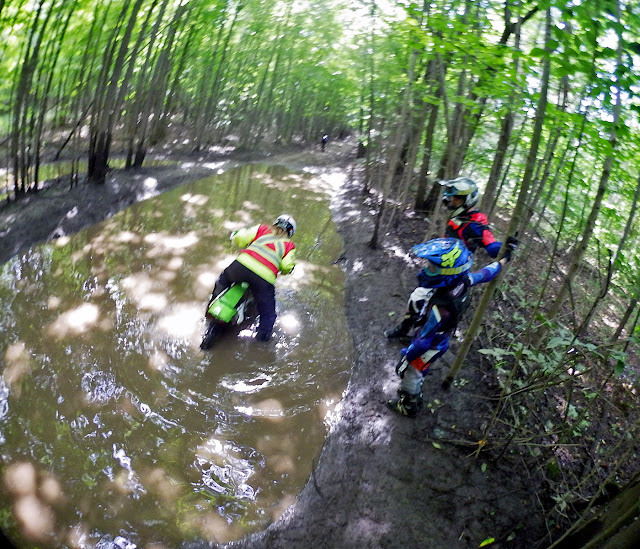 I’m not sure how to address that as I’ve been going to SMART for a long time and I did have a good afternoon, but when I’m paying quite a lot of money for three hours of riding and almost a third of it is taken up with catering to what was clearly a non-expert rider, I’m left feeling (for the first time ) like I didn’t get my money’s worth.

We went to Stratford yesterday to Perth County Moto’s 5th anniversary.  T’was a good time.  If you find your way to Stratford, Ontario at any point, look them up, they’re right downtown: 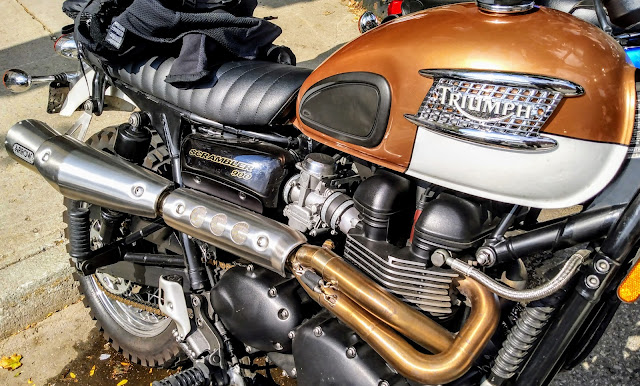 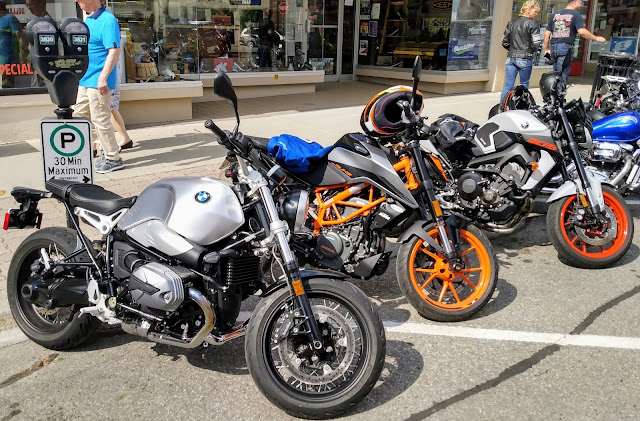 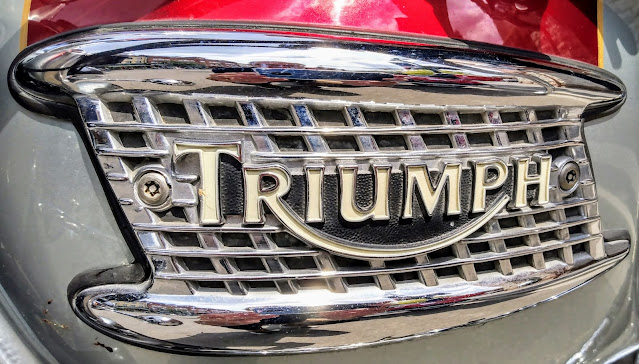 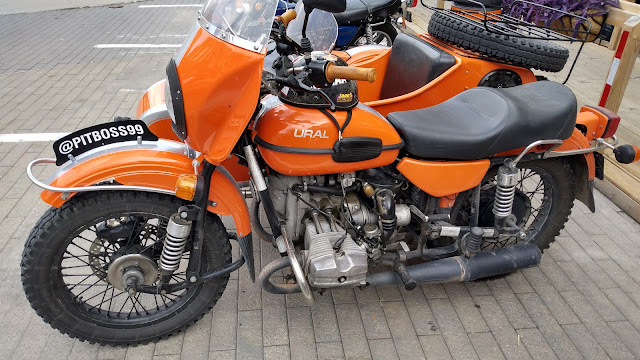 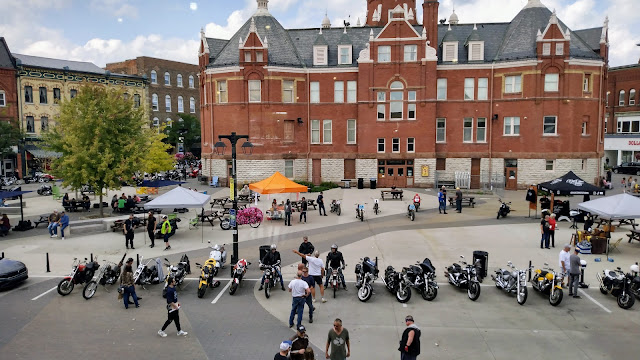 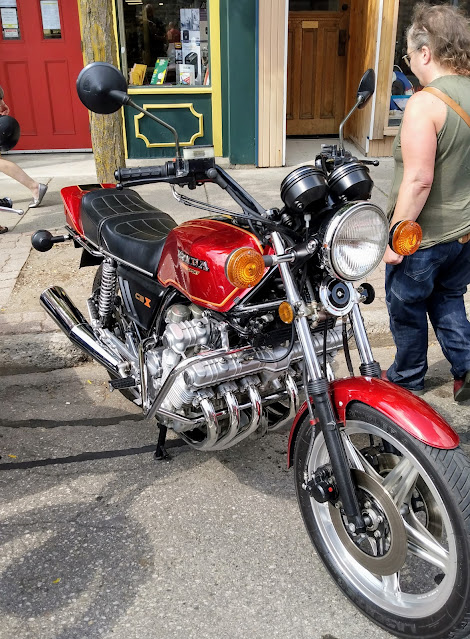 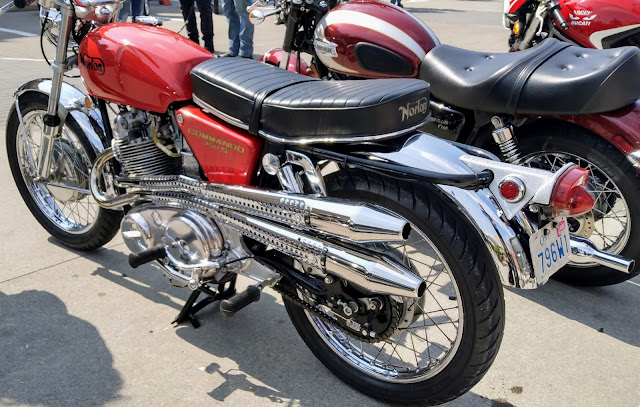 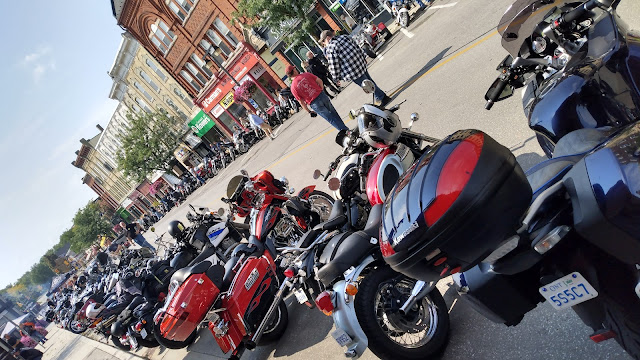 I got myself a vintage style dirt tracker team sweater (they’re like rugby jerseys) for a good price!

I haven’t been spending much time in the garage beyond upkeep and maintenance on the two operational bikes.  I’m saving the Bonneville project for the cold months when I need to keep my hands busy and riding is far away, though I did start re-assembling the frame (seemed like a logical place to start). 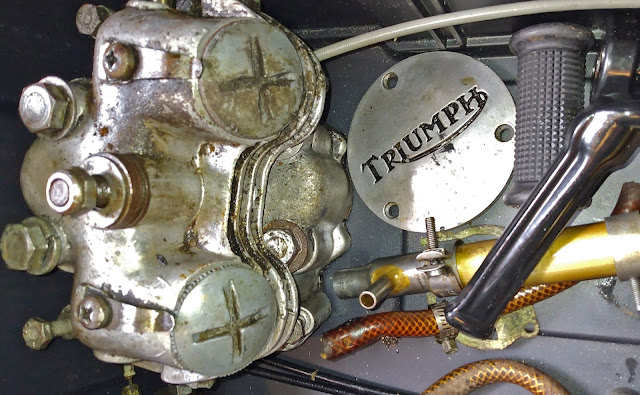 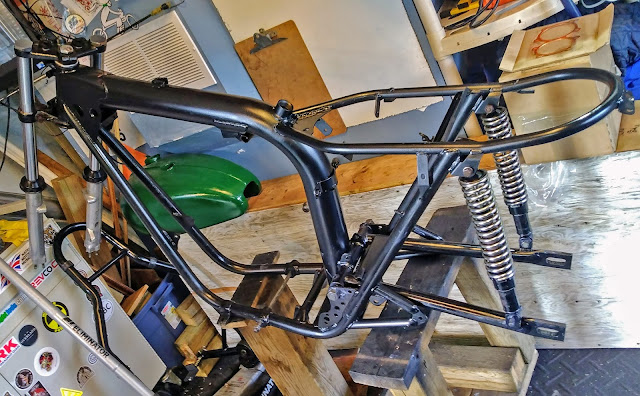 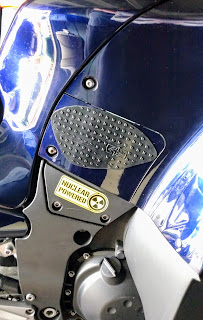 The oil filters came in for the end of year oil change (I always put in fresh oil and filter and run them through before the big hibernation).  It’s a depressing delivery, but I’ve still got another six weeks or so before the snows fall.  With the filters I got some tank pads to stop myself sliding around on the Concours.

Next week we’re aiming for the Wine y Cheese Rally on September 24th.  We’re going to head down to St. Catherines on the Friday and then be up and at it by 7am on Saturday morning.  This is the only rally we’ve been able to line up this busy summer, so I’m looking forward to it.  We’ve been fettling the Concours to make it as functional and capable as possible for this long haul.  We finished our last one on the Tiger last summer, so I’m not even super concerned with finishing so much as I am just having a good time with it.  Signups still seem to be available, so if you’re looking for an excuse to ride and ride next weekend (cooler temps but the weather looks good), then give it a go. 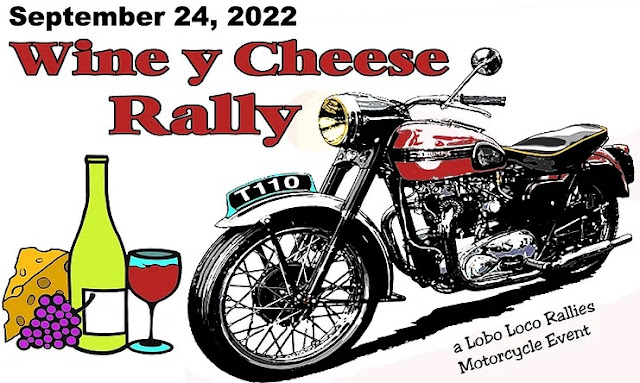 Gotta get time in the saddle in before the snows fall!