I came home last weekend to a lot of noise from the rear brakes.  A closer look showed virtually no pad material left, so it was time for new pads.  I thought I had some at the ready, but it turns out they were for the Concours.  A quick online shopping trip to Fortnine got me sorted out.  Surprisingly, the rear pads are the same as the front pads – I think the Tiger is the only bike I’ve owned with the same pads front and back. 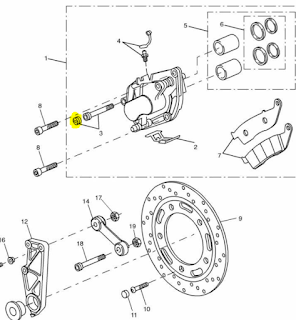 Everything went smoothly until I got to the caliper pin – it’s the bar the brake pad hangs on as it it presses into the disk.  The end of the pin was (rather bafflingly) a slot screw, which isn’t a very nice choice for something like a caliper pin which will get hot and cold over and over again for years between service.  Slot screws aren’t famous for great purchase and tend to strip easily, like this one was.


It was only after looking at the parts blowup that I realized the slot screw I was trying to remove was actually only a cover and the hex-head pin underneath was actually hidden away.  Once I realized I was only removing a cover, I applied some heat with a propane torch and got the thing loose.  I wouldn’t have tried that had it been the pin itself – too much thread resistance.


With the cover removed, the pin, with its easily grippable hex-head came out easily.  Once disassembled I soaked the retaining clips and calipre pin, both of which had years of dirt and rust on them.  The next morning I greased everything up and reassembled the caliper with shiny retaining clips and pin, along with the new brake pads.  I had to force the caliper piston back to make space for the new pads, but this was relatively straightforward with the rear brake fluid container cap removed.  The fluid back filled into the container as the piston pushed back with little resistance.


With the new pads on, I put the two body panels I’d removed for access back together and tightened it all up.  The caliper was still moving freely – not bad after seventy thousand kilometres on it.  Judging by the rough edges of the caliper pin cover, I wasn’t the first one in there.  Before I put it back I used a hack saw to deepen the groove.  Hopefully that’ll make it easier for getting into it next time, that and some judicious lubrication. 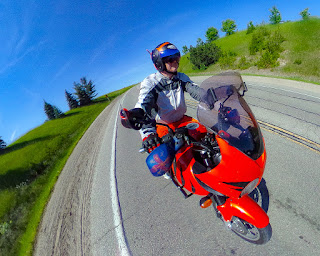 I took it for a few loops around the circle in front of our house and bedded in the pads.  After a minute or two they were biting so hard I could easily lock up the back wheel, so them’s working brakes.


A ride up and down the river to double check everything showed it all to be tight and dry and working perfectly.  No drag with the brakes off and quick response when I applied them.


That’s how to do your rear brakes on a Triumph Tiger 955i.  I’ve got the front pads on standby.  Hopefully what’s on there will last until the end of the season then I’ll do the fronts over the winter.  Should be a pretty similar job as the pads and calipers are identical.