First long ride with Big Blue/Nami-Chan (not sure what its name is yet) today up to Georgian Bay to listen to the water.  For a kid who grew up by the sea, living in landlocked Southern Ontario wears on me, so sitting by the shore listening to the water lapping on the rocks calms my permanent sense of dislocation. 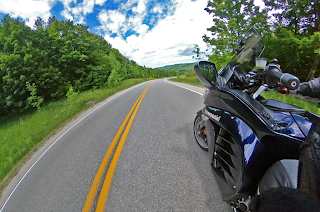 What’s the Concours 14 like to ride over distance?  It’s a very comfortable long distance machine. Compared to the Tiger it’s smoother, significantly less vibey and quieter.  This isn’t necessarily a good think because riding a motorbike isn’t always about comfort – sometimes you want it to beat the shit out of you.  What is good is that the 1400GTR is a significantly different bike to ride than the old Triumph Tiger, so both fill a different need in the bike stable.

The Tiger (when it works perfectly which isn’t often recently) is a capable off roader on trails and fire roads and lets the wind pass through you since it’s practically naked, which is both exhausting and exhilarating.  After the long ride today the abilities of the Kawasaki are much more clear.  The only nagging issue is that my backside has gotten used to Corbin seat engineering and the Kawasaki stock saddle just isn’t up to the job, but otherwise the bike is a revelation.  Effortlessly quick, smooth and surprisingly agile in the corners, though you can still feel the weight carries but it carries it low.

For the first time I adjusted the X-screen modular MCA Windshield to its maximum length and it did an astonishing job of protecting me at highway speeds.  So much so that I barely closed the Roof helmet on the ride.  The pocket of air it creates is stable and the wind noise so much less that it’s just another aspect of this bike that’ll let you do long miles without exhausting yourself.

Ergonomically, the windscreen also does something smart for airflow.  If it gets hot you can lower it to the point where it almost vanishes.  This pushes a lot of air through your upper body and supports your chest from leaning on your wrists.  I hadn’t put much stock in an adjustable windshield but it not only changes the look of the bike, it also changes its functionality too.  On long rides changes in airflow keep you comfortable and focused.

The bike itself seems to manage heat well which the old ZG1000 previous generation Concours 10 I had did not (it used to get stupid hot!).  If stuck in traffic, even over 30°C pavement, the temperature gauge never went above half way and the fans haven’t needed to come on yet.  The lack of wind-flow over my legs on hot summer rides may yet be an issue though, the fairings are too good.

The other complexity piece of the C14 that I wasn’t sure I was interested in was the digital dash but that too is proving valuable.  I’m no longer guessing what gear I’m in based on revs and road speed so I’m no longer trying to shift into a non-existent 7th gear, which happens often on the Tiger.  Though the 1400GTR revs so low while in 6th/overdrive (3200rpm @ 110kms/hr) that you wouldn’t be looking for another gear anyway.
Mileage has been a concern on this smaller-tank/worse mileage than the Tiger bike.  The Kawasaki’s 22 litre tank is 2 litres smaller than the Tiger’s which also gets 10+ more miles to the gallon.  I’m going to fill up a spare 2 litre gas canister and run the Kawasaki for maximum range a few times to see what this C14 can actually do.  When I fill it up it cheerfully states it’ll do 360km to a 22 litre tank which works out to 38.5mpg or 6.1 litres per 100 kms.  The display shows when you’re maximizing mileage so a long ride without wringing its neck to see what mileage it can achieve is in order.  If I can get 400kms out of a tank that’ll put me up into the mid-40s miles per gallon, which would be a good return on such a heavy, powerful machine.  The range indicator jumps around to the point of being meaningless and then cuts out when the bike gets low and you need it most – not the best user interface there, Kawasaki, but I’ve heard there may be a wiring hack to stop that from happening.

So, after a 290ish km run up to Georgian Bay and back I’m very happy with the bike’s power, which is otherworldly, it’s comfort is good but I’m looking at seat improvements.  I’ve heard other larger riders put peg extenders on so there is a bit less flex in the legs, which might eventually happen.  Many people also put bar risers on them so the bars come towards you a bit more, but I’m finding that I’m able to move myself on the seat to get a more vertical or more sporty riding position depending on what I’m doing, so bar risers aren’t on the radar.
I did pick up a spare fuel bottle that fits nicely in the panniers (which take a bit of getting used to for all the keying in and out but are huge and don’t affect the bike at speed at all).  Next time I’m on a long ride I’ll top the spare bottle up when I top up the bike and then see how far I can push the range. 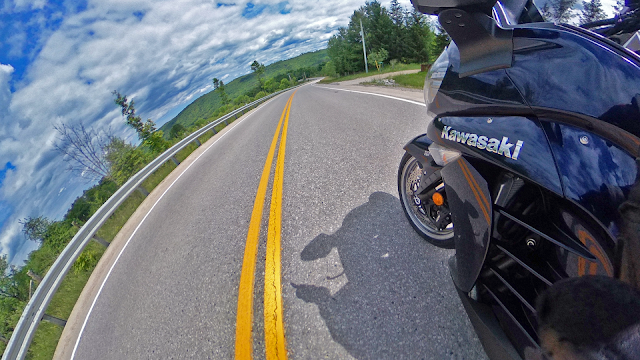 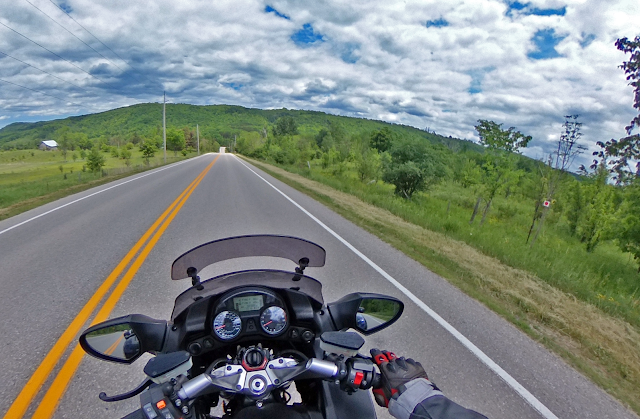 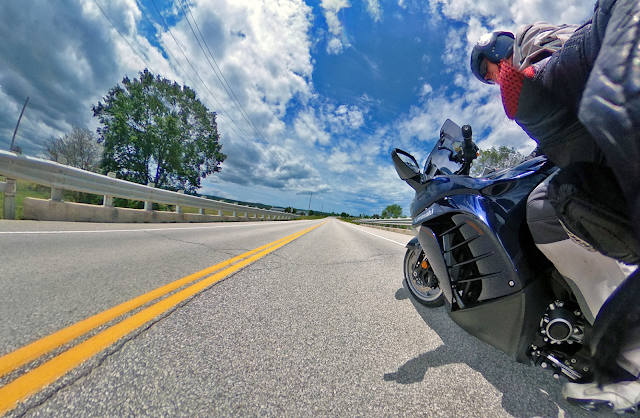 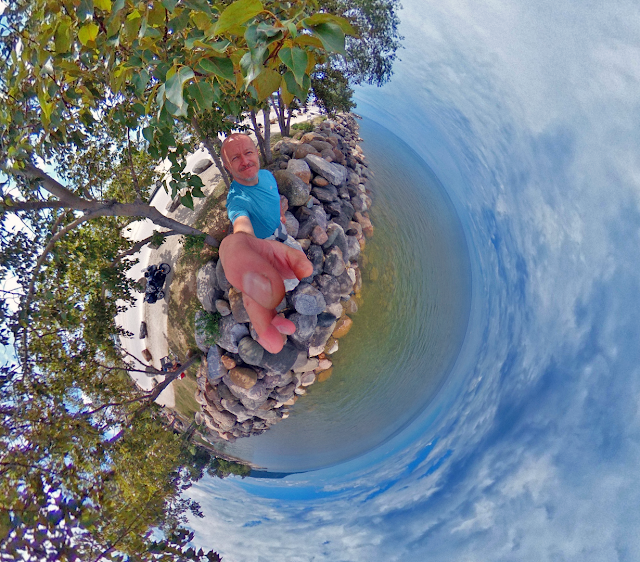 It was an uneventful ride except for one incident.  Leaving Thornbury harbour the 360 camera fell out of my pocket onto the road.  I pulled over quickly and safely and then ran back to scoop it up off the road.  There was traffic back at the lights in town just starting to move and 3 cyclists riding on the side of the road coming towards me but still some way away.  I ran out to the camera, scooped it up and ran back to the curb and almost took out one of the cyclists who had elected to accelerate towards me rather than giving me space to get off the road.
She yelled, “bike!” and I made a dexterity check that had me dodging around her rather than taking her off the bike.  They kept going but I was left standing there wondering what the thinking was.  You see a guy duck out into the road to pick something up so surely you would ease up a bit and let him do what he needs to do to get out of the way – but not in this case.  From what I’ve seen of cyclist’s approach to sharing the road, I imagine that I’m entirely at fault for that.  It left me shaking my head at their thought processes. 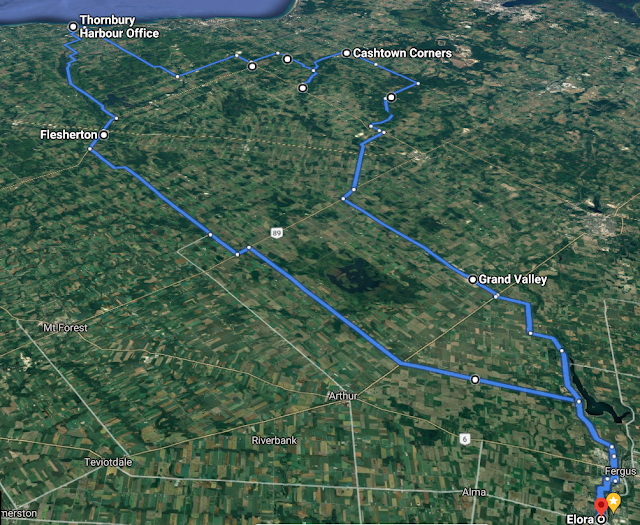